The Duchess of Kent Children’s Hospital at Sandy Bay 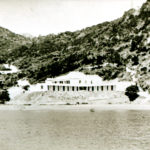 the Relief of Disabled Children in the mid 50’s. It was the brainchild of Professor Hodgson and a group of charitable businessmen from Hong Kong. Initially called the Sandy Bay Convalescent Home, it is situated in Pokfulam, by the sea, about one kilometer from Queen Mary Hospital. Do not be deceived by its name, as even in the early days, the bay that it stands on is full of rocks and relatively little sand. 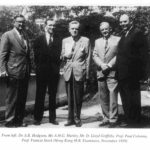 The Home initially had fifty beds and was usually occupied by patients with tuberculosis of the spine. The standard treatment for tuberculosis of the spine then was anti-tuberculous therapy with bed rest for months, often up to a year. Even with the advent of the Hong Kong Operation of Anterior Spinal Debridement and Fusion with Bone Graft, developed by Professor Hodgson, the patients had to be kept in bed until the grafts incorporated. In those days, the disease was usually extensive, requiring long bone grafts, and the Home provided an ideal place for long term convalescence.

Around the time when the Home opened, the poliomyelitis virus attacked Hong Kong, inflicting a significant number of children and many of these were left with residual problems in the skeleton. The Society for the Relief of Disabled Children responded to this by expanding the Home, which included a physiotherapy department with an indoor heated hydrotherapy pool. This was one of the first in Hong Kong and was in anticipation of the demand of physical treatment that would be required of these children. The extension opened in 1962 and fifty beds were added. This addition proved invaluable as it not only provided the appropriate treatment for those in real need, but also provided a significant relief on the strain on hospital beds for children in the general hospitals.

The surgical operations on these children were performed mainly at the Queen Mary Hospital. But as operating time was limited, some of these operations were also done at the Ruttonjee Sanatorium, an anti-tuberculosis hospital ran by another charity. Initially, this only involved children with tuberculosis but later on, with increasing demand on operation time, a lot of the surgery involving polio patients was performed there. With this in mind, the Society for the Relief of Disabled Children took another challenge. They expanded the Convalescent Home further to a hospital with an Operation Theatre Suite and all the other facilities and services required to support the new addition.

With a powerful fund-raising team and assistance from government, the Sandy Bay Children’s Orthopaedic Hospital and Convalescent Home opened in 1968. (The name of the hospital was subsequently changed to its present form after a visit by the Duchess of Kent in 1974.) The first operation was done on 25th July 1968. I witnessed the event, as I was an intern in the Orthopaedic Department in Queen Mary Hospital at that time and Sandy Bay was one of the peripheral hospitals covered by the Department.

The Columban Sisters, a Catholic religious order with good hospital management experience, ran Sandy Bay in the early years. They were managing the Ruttonjee Sanatorium. Sandy Bay’s matron cum chief executive officer was always a Columban sister and Professor Hodgson, and later on Professor Arthur Yau, was honorary medical superintendent. The Sisters ran the Home, and later on the Hospital, most efficiently. They were caring on the one hand and meticulous on the other, and would never fail to carry out any of the policies or orders set by the doctors on the patients. One of the policies that Professor Hodgson insisted on was that all patients’ records be clearly written or typed and all notes and X-rays must be kept indefinitely. Sandy Bay has maintained this policy until today. This, indeed, was the secret behind Sandy Bay’s wealth in clinical research material. Credit should not just go to Hodgson alone, but also to the Columban Sisters, who made this possible. Very sadly, they had to leave Sandy Bay in the late 70’s.

I joined Sandy Bay as a medical officer in 1969 immediately after I finished my internship and was a paid member of staff for two years. The Hong Kong University Orthopaedic Department then took me over as lecturer, and seconded me back in 1976. I became Medical Director (honorary) of the Hospital in 1978 and remained till I left in 1989. Despite leaving the hospital, I remained in the Executive Committee of the Society for the Relief of Disabled Children and later on became its chairman. With handing over of the hospital to the Hospital Authority of Hong Kong, I automatically became the chairman of the Hospital Governing Committee of the Duchess of Kent Hospital at Sandy Bay. I, therefore, had first hand knowledge of what took place at the Hospital at Sandy Bay.

One of the outstanding features of Sandy Bay was its fellowship programme for young orthopaedic surgeons outside of Hong Kong. Every six months, two young surgeons who have just finished their orthopaedic programmes in their own country are selected to take up posts in Sandy Bay. The programme was installed almost immediately after the Hospital was established and has continued until today. Surgeons from all over the world have taken up these fellowships, most commonly from the United Kingdom, United States, Australia, Japan and other Asian countries; but also from Argentina, Nigeria and South Africa, and lately mainland China. The programme was extremely popular. For every surgeon that made the trip to Sandy Bay, at least another two were rejected. Many of those who came here are now orthopaedic celebrities in their own country and the world.

Hong Kong, through Hodgson and Yau, pioneered anterior spinal surgery with their work on tuberculosis of the spine. And in the late 60’s and early 70’s the world was becoming aware of the importance of the anterior technique. They realized that the anterior approach allowed greater flexibility in the management of spinal problems, such as spinal deformities and injuries. This approach to the vertebral bodies offered greater bone mass for fusion and instrumentation, and in turn would provide greater stability, earlier union and rehabilitation. There was a growing thirst for knowledge of the anterior technique. Hong Kong was the ideal place to learn it from, and Sandy Bay was the ideal venue. Up to date, over 120 orthopaedic surgeons have gone through this programme.

The other great clinical attraction at Sandy Bay was the development of the Halo-pelvic apparatus. At the time when Sandy Bay became a hospital, there was little in the way of spinal instrumentation or internal or external corrective devices for spinal deformities. The only spinal instrumentation available was the Harrington rods and the only external corrective devices were body casts and halo-femoral traction. John P. O’Brien who was with the Department then, developed the use of pelvic pins through both ilium, connected a ring to the pelvic pins and then extension bars from the pelvic to the halo ring. With distraction of the extension bars, extremely powerful forces could be generated and very rigid deformities could be corrected. The gadget became very popular and attracted a lot of international attention. The Hospital manufactured the apparatus and was receiving orders from all over the world. It was ideal for the correction of the tuberculous kyphosis, which was a common deformity at that time. And a lot of these patients benefited. With the development of better and stronger spinal instrumentation, the halo-pelvic apparatus has gradually been replaced by other means of spinal fixation or correction.

In the 70’s, Sandy Bay was without doubt, an international attraction. The anterior spinal work, the halo-pelvic, the large numbers of severe scoliosis and kyphosis cases which previously Hong Kong could not handle, the crippling polio deformities in the limbs, the large number of congenital deformities and children’s orthopaedic problems and injuries that have filtered into Sandy Bay, mostly from Hong Kong itself, but also from abroad, made Sandy Bay very attractive for a clinical visit. The attraction to visit included international orthopaedic celebrities such John Moe from Minneapolis USA, Robert Salter and John Hall from Toronto, JIP James from Edinburgh, Lloyd-Roberts from London, Kashiwagi from Japan, and many others from all parts of the globe. Personally, I was most impressed by John Hall, an excellent spinal surgeon from Toronto. The posterior spinal surgical technique that he demonstrated in Sandy Bay was so impressive and useful that I have used them until now.

Motivated by clinical success at the Hospital, the Society for the Relief of Disabled Children and the Hong Kong University Department of Orthopaedics went further and invested research facilities and manpower in the Hospital. A gait laboratory and a center for spinal research studies was established with purpose built facilities in the mid 80’s and had provided visiting fellows and trainees the right environment for study and research. The Society, where appropriate, also provides research funds for this purpose.

With tuberculosis and poliomyelitis under control, the number of orthopaedic cases has dropped slowly over the years and the Hospital has had to redirect its service into other areas of paediatric care. The Children Habilitation Institute is the latest addition to the Hospital. Run by a developmental paediatrician, this is a referral center for children with any type of developmental or neurological problems ranging from cerebral palsy, muscular dystrophy, autism to simple deafness and mental retardation. It houses the ventilation center, which provides training facilities to children with spinal muscular atrophies to ventilate themselves. This center is the first of its kind in Southeast Asia.

In the last 50 years, the life style in Hong Kong has changed from squatter huts and poorman’s night club to posh high rise units and restaurants in Soho. The pattern of orthopaedic diseases has changed in a similar fashion from tuberculosis and poliomyelitis to congenital and genetic anomalies. Sandy Bay went through this change with Hong Kong and I was very lucky to have shared a part of it.