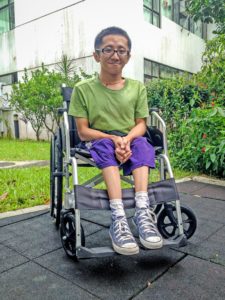 Chen Pei Fen lives in Dongguan with his mother and elder brother. His left femur was fractured 40 days after birth and he was later diagnosed with Osteogenesis Imperfecta (OI), also known as “brittle bone disease”, which is a genetic disorder causing the patient to have fragile bones. Due to his disorder, he has had multiple fractures.

Chen Pei Fen also had scoliosis, which is the sideways curvature of the spine, and it affected his sitting posture and truncal balance (as well as cosmesis). He could not walk or take care of himself. Because there are already three known members of his family with this genetic disorder, the family was put under serious financial difficulties to support Chen Pei Fen.

Between the age of six and 16, Chen Pei Fen had 12 surgeries to correct his deformities. Yet the result was not good, he was unable to walk and take care of himself. When he was 13, he also had surgeries on his femurs in Tianjin. With four times of Pamidronate Disodium injections and daily workouts, he was finally able to walk more than 10 meters per day and take care of his basic needs.

Unfortunately, at the age of 15, his spine deformation worsened and was likely to continue worsening even after his skeleton fully matured. Guan Wen Chi, a former OI patient who we treated in the 1990s, advised him to visit the Duchess of Kent Children’s Hospital at Sandy Bay (DKCH). However, because of financial issues, Chen Pei Fen’s family did not consider ultra-major surgery at that time. Unfortunately, he was in quite a bad condition two years later, so it was necessary for him to undergo the surgery.

Chen Pei Fen experienced pressure sores and discomfort while sitting on the wheelchair due to his tilted pelvis.  Surgical treatment was suggested in order to prevent the scoliosis from progressing further, improve his balance (enabling him to sit and walk comfortably), and ultimately to give him a better quality of life. 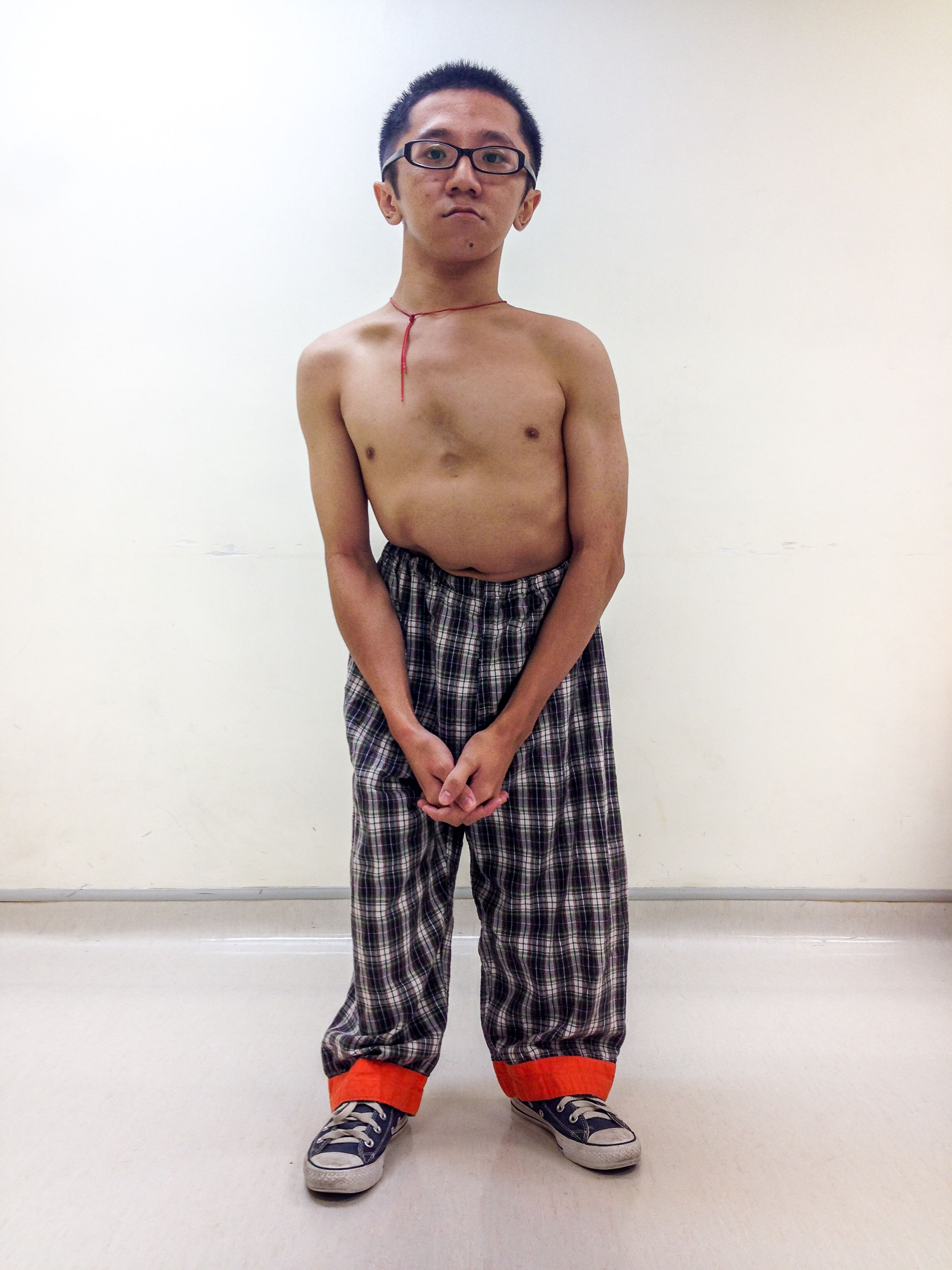 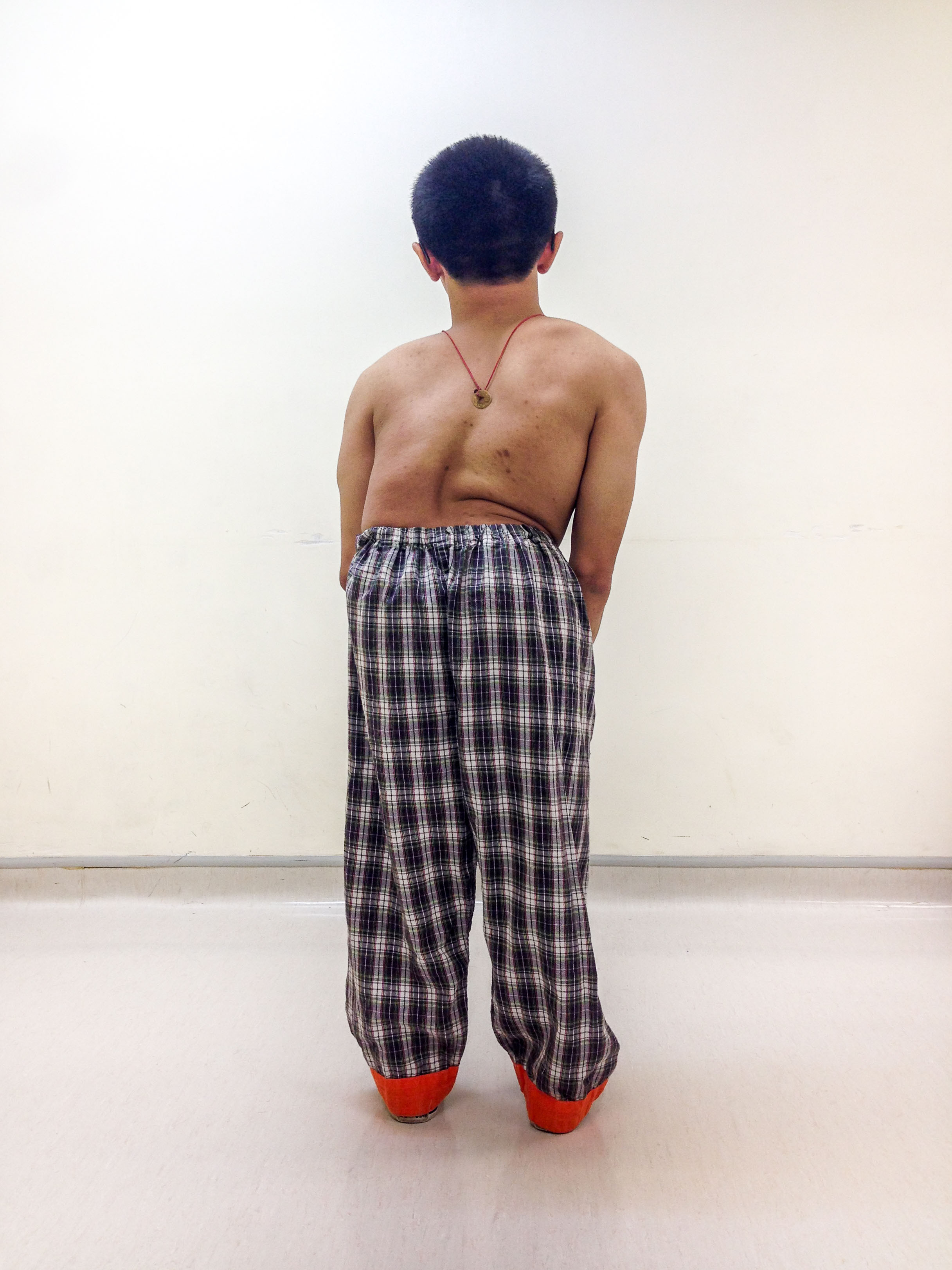 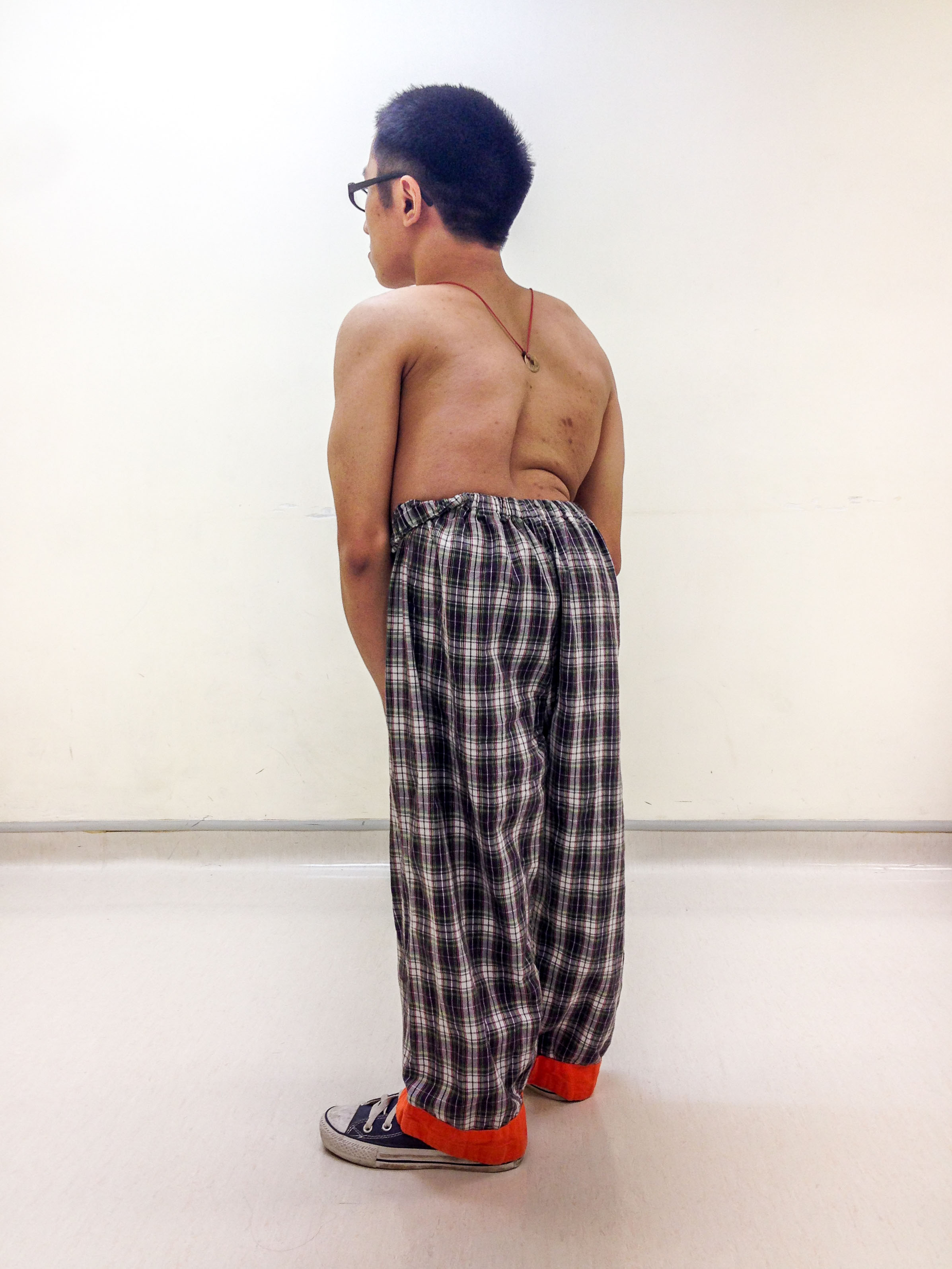 With help and sponsorship from SRDC, Chen Pei Fen was able to undergo the ultra-major fusion surgery at the age of 17, which consisted of the stabilization and alignment correction of his spine through in-patient halo traction, osteotomy (surgical cutting of bone) and instrumented spinal fusion. At first, he stayed at DKCH for the three-week in-patient halo traction. The process of the weights combined with the pins holding onto his skull was very painful, and he even experienced vomiting and dizziness on the first two days. This was then followed by the 13-hour ultra-major fusion surgery to correct his scoliosis – a sideways curvature in the spine. During the surgery, pedicle screws were placed in consecutive spine segments and connected by a rod to prevent motion at the segments that were being fused.

It was a very high-risk surgery, but it was successful. His thoracic Cobb’s angle was reduced to 50 degrees from 90 degrees, and lumbar from 108 degrees to 70 degrees, which was a huge improvement. Nine days after surgery, Chen Pei Fen was able to get off the bed and walk with some support. Two days later, he returned to his home in Dongguan, where he continued his rehabilitation. Within two months, he was able to sit properly for at least eight hours per day and exercise for two hours per day with the assistance of a wheelchair. He now has a much better quality of life, as he can sit, walk and perform daily functions comfortably, and is very grateful towards SRDC for their help and contribution towards his new and improved life. He is looking for a job.